If I were a wrestler, I’d call myself Skull-Face McBadguy. 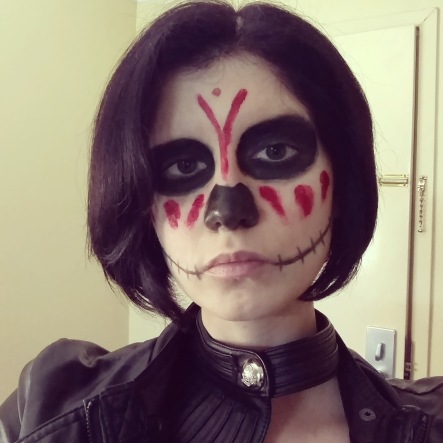 Help me make this a trend so I can stop struggling to do cat eyes, please.

If my plot were a wrestler, it wouldn’t have a name, it’d just be a big dark mass of meanness that comes out and suplexes me to death.

But I digress! A lot. As I discussed here, I’m writing a new book, which happens to be a follow-up to Bloodlands, and I’d like to talk about it as I go along because–who knows?–someone might be interested in learning how this stuff pushes out of my brain meats into book form.

Today, I’ll be talking about plotting, how much of a pain in my ass it is, and what I’m trying to do about it.

My day job (which unfortunately frowns heavily upon skull makeup) is working on a problem solving/process improvement team at a manufacturing facility, which, of course, is the most natural place for an English major to end up. One of the many things I’ve learned from my job is that any process can be improved, and that in order to improve a process, you must first define it. As I looked toward writing book 2, I started by mapping out my process for book 1, which ended up looking something like this:

In order to quantify these issues, I made Pareto charts of how long each process step took. (It’s okay to scream “NERD!” at your screen right now. I promise I won’t take offense.) 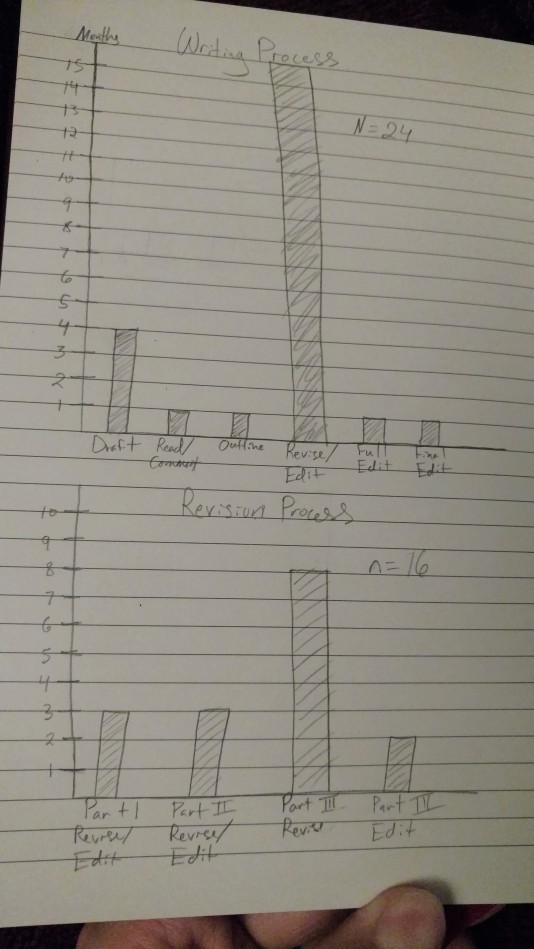 Straight lines? Not one of my many skills.

Altogether, it took me two years to complete Bloodlands, over a year of which was spent just trying to untangle the back-half of the plot.

Plotting has long been a weak point for me as a writer because I tend to be more concerned with the characters’ emotional journeys and the big moments that facilitate them than I am with the specific details of how the characters get from one big moment to the next. For example, I knew Senora needed to have a final confrontation with Diablo and knew what the outcome of that confrontation needed to be, but I rushed through the business of getting her to that moment in the first draft, only to realize later that the way I’d done it didn’t make much sense.

(I could–and maybe I will–do an entire blog post on just how drastically I ended up having to change Part III as a lesson on story-telling and how not to do it.)

My plot-making mojo also seemed to start running out the closer I got to the end of the book, which was likely a side-effect of fatigue from rushing to get the first draft done without having a solid plan. For Bloodlands 2: The Bloodening, I started to scribble plot ideas in a notebook, but found that I tended to ramble and deep-dive into ideas until I’d have pages and pages of massive paragraphs that were difficult to parse at a glance. I decided to create something more visual that I could reference easily and change quickly. 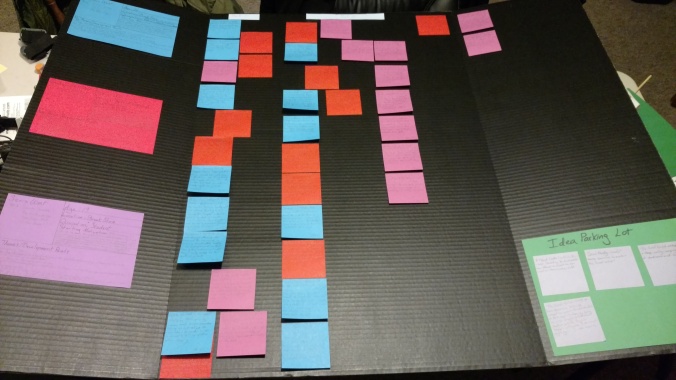 The Visual Plot Map. Each card to the left represents a main character and lists basic info and starting motivations. The corresponding sticky notes represent story beats for each character. The actions flows from top to bottom, and where the notes are aligned, the characters’ stories are interacting. Where they’re separate or separating, the character’s story is branching off on its own.

I’m still not sure I’m satisfied with the visual flow of the action, but it’s the best arrangement I’ve come up with so far. As you can see (maybe), I haven’t quite started detailing Part III yet. Some of the ideas in Part II need a little fleshing out as well. I’m ultimately not sure if this will reduce my rework time once the draft is done. After all, the outline I made after the 1st draft of book 1 ended up going largely ignored as the writing took me in different directions. I expect this to happen to some extent now even with the plot map on hand, but I’m hoping that by having a solid high-level plan, I can knock down my future revision times. Having the plot map has already allowed me to see up-coming issues and adjust accordingly before writing the whole story out.

You might also notice there are three characters on the map instead of just the two you might expect. One of the supporting characters from Bloodlands has officially been upgraded to main character status. Which actually sucks for them. I’m pretty mean to my main characters.

I think soon I’ll share the character cards. Or at least facetious electronic recreations of them.