Greetings from the other side of the apocalypse, readers.

(^The inside of my house, helpfully providing me with a real life demonstration of a post-apocalyptic setting.)

Okay, it’s not really the apocalypse. I just got internet back this week and there are no roaming bands of cannibals in my town, though it was pretty touch-and-go there for a few weeks.

Most of my readership lives in the Panhandle area, so you’re probably pretty familiar with the story here. If you’re from outside the area, here’s a summary:

In early October, a small tropical storm in the Gulf of Mexico level-grinded its way to a Category 4 hurricane practically overnight. People in low-lying areas at risk of storm surge evacuated a day or two beforehand, along with others who were either more scared or more responsible than the rest of us. Those of us who stayed hunkered down with memes, booze, and a few cans of year-old spaghetti-o’s left over from the last hurricane scare (as dictated by official Floridian hurricane preparation customs), and we made nervous jokes on Facebook right up until Michael landed as a might-as-well-be-Category-5 and blew all our power lines and cell phone towers away.

If you don’t live in Florida and you’re wondering why anyone would even chance staying, please understand that “there’s a tropical storm in the Gulf” is pretty much a constant and unyielding truth in the month of October, as enduring a fact of life as “water is wet,” the “sky is blue,” and “Marvel makes better movies than DC.” This thing was supposed to hit as a category one, maybe a three. By the time it maxed out at a 4.9, it was simply too late to leave. This storm was a BB pellet that we didn’t realize was actually a bullet until it was an inch from our foreheads.

We rode out the storm in our cement disaster shelter, which is built partially into the ground and has a small window with a view of the side yard. We watched a massive tree whip back and forth, alternately threatening our shelter and our neighbor’s house before it finally toppled away from us, splitting the neighbor’s house in two. Luckily, they’d evacuated. We watched a chunk of roof land in front of our bedroom window and took guesses on whose it might be (spoiler alert: it was ours). The window rattled in its frame, the cat howled, the alarm at the school nearby shrieked, and all of that was just barely audible above the roar of the wind and the snapping of trees. 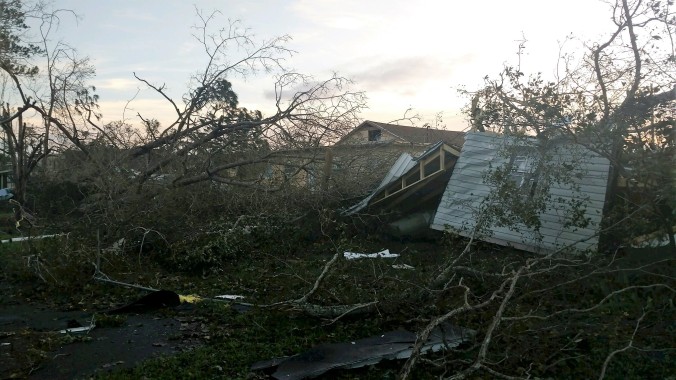 The dead forest that was left in our backyard. That crumpled gray building? That’s our shed.

When the wind finally settled, we were left with a totaled den (roof torn off, ceiling collapsed), a busted window and water-damaged living room, a tree on the roof of our dining room, a crushed shed, an uprooted sewer pipe, and a house open to the elements. We stayed one night in our sweltering bedroom with the door shut and a pistol on the nightstand in case looters got an early start. Little sleep that night as helicopters criss-crossed the sky overhead and the school’s alarm kept on until midnight. We had no cell service to check on anyone else we knew who had stayed–my in-laws, our friends, our co-workers. First thing in the morning, we packed up what we needed and what we didn’t want stolen in our absence and swerved our way around fallen trees and under drooping power lines to my in-laws to make sure they were okay, then we got the hell out of town, mostly via precarious off-roading.

In the weeks after, we were nomads. We went first to my aunt’s in Alabama, then to my mom’s, spent a night in my sister-in-law’s ex-husbands’s mother’s rented beach house (I’m not making that up), on to my sister-in-law’s apartment while she was out of town, then to my dad’s, then to my parents-in-law’s house, and finally to a borrowed camper in our own backyard. We lived out of suitcases and traveled with a box of canned goods in the car.

At least until I got into my first-ever accident when my car was run off the road into a drainage ditch two weeks after the storm, forcing me to rent an SUV for a while.

Somewhere in the midst of all that, I went out of town for a weekend convention. 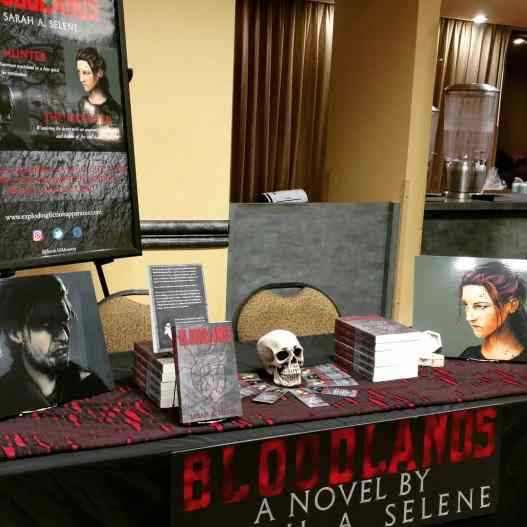 I was incredibly lucky that my inventory and set-up supplies survived. Much of my personal library did not.

I also did my first-ever public book reading and signing event at the Panama City Publishing Company Museum, which was fun and not at all terrifying for a socially awkward person. 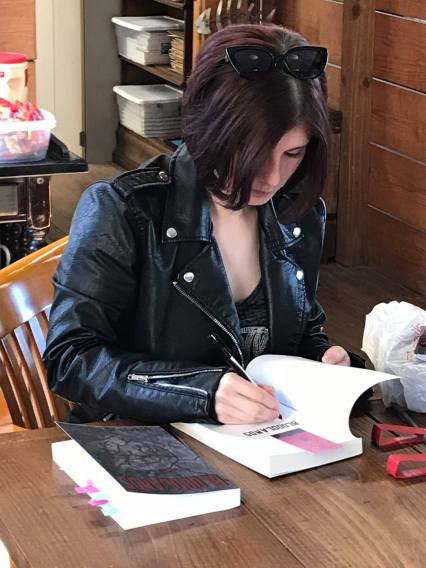 I mostly managed to keep a straight face while reading! Also, over-grown roots was not the badass post-apocalyptic hairstyle I’d always imagined for myself.

I say all that to explain that writing got shifted to the back-burner for a bit, but life experiences are an important part of writing, and I sure as hell wracked up a lot of them in the past couple of months.

For example, I couldn’t have imagined just how much insulation gets absolutely everywhere in a destroyed/dilapidated environment.

Writing didn’t take a backseat permanently, however. Because I’m a masochist and I’d committed to it before the storm, I did participate in NaNoWriMo despite the current chaos of my life. I had to write at weird times in weird places, but I finished by the skin of my teeth and am now 50,000 words deeper into the Nightlands re-write than I was.

Moving forward, I think my next goal will be to polish up Part I and start shopping it out to beta readers. I’ve also started rewrites on Part II. I’m still looking to finish/publish sometime next year, but it may end up being a little later in the year than I initially anticipated.

Finally, if you’ve managed to stick through this lengthy post full of personal BS so far, I think you deserve a small sample as a reward: